This site may earn affiliate commissions from the links on this page. Terms of use.
(Credit: Pavlo Gonchar/SOPA Images/LightRocket via Getty Images)
Dish Network and an environmental group have become unlikely allies in a new court case. Both Dish and the International Dark-Sky Association have filed lawsuits in the US demanding the FCC rescind the licenses it recently granted to SpaceX for its second-generation Starlink network. They have different reasons for making this demand, but the end goal is the same: fewer Starlink satellites in orbit.

According to Dish, the proposed Starlink Gen 2 network would cause disruption in its satellite TV business. “The order leaves millions of families receiving satellite television service from Dish in the same frequency band vulnerable to interference,” says Dish. SpaceX, however, needs a larger network to keep the service afloat. Speeds have dropped over the past year as more consumers sign up for the service.

International Dark-Sky Association (IDA) is bringing the concerns of astronomers to court. Even the smaller V1 satellites have photobombed numerous important observations of the night sky, and SpaceX’s promise to make its satellites less reflective has not solved the problem. The IDA claims the FCC should have ordered an environmental review to study the impact of Starlink Gen 2 satellites on astronomy.

Concerns began percolating last year when the FCC granted SpaceX a license to launch 7,500 Gen 2 satellites that will orbit at altitudes of 500 kilometers or higher. At the time, the FCC patted itself on the back for lowering the total number of satellite licenses for SpaceX. However, the company’s true Gen 2 satellites will be much larger with the capability to communicate with smartphones on the ground in addition to providing satellite internet. That has astronomers worried the reflections from these objects could be even worse for observations of the night sky than the first-gen satellites. SpaceX has not issued a public statement on the lawsuit, but it has asked to defend the FCC order in court in a new filing. 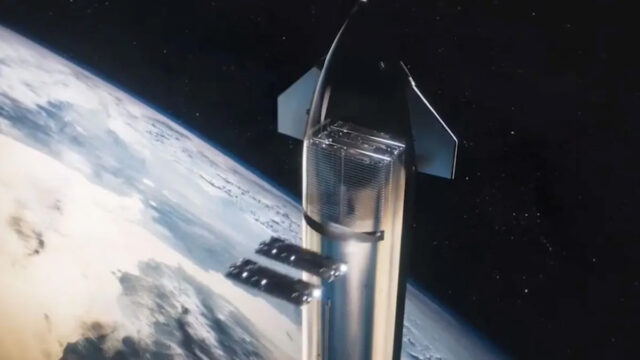 Starlink Gen2 satellites are just the right size for the larger Starship, but they will need some tweaks to ride in a Falcon 9.

SpaceX began its Starlink Gen 2 campaign several weeks ago with a Falcon 9 launch. However, it’s unclear if those satellites had any enhancements versus the Gen 1 hardware. CEO Elon Musk has stated that it will need the upcoming Starship rocket to launch the larger Gen 2 satellites. And even if it does redesign the v2 hardware to fit inside the Falcon 9, it’s going to need the bigger rocket to deploy them at scale.

Starship is still in development, set for its first orbital test in the coming months. Starlink Gen 2 progress will be slow or non-existent until this vehicle is ready. That could give Dish and the IDA time to have their cases litigated before the damage is already done. However, the cases are probably long shots. If anything, it will push SpaceX to devise ways to mitigate the concerns that motivated the legal action.

What’s at stake in the suit against TikTok, Instagram, and others – GeekWire

What's at stake in the suit against TikTok, Instagram, and others – GeekWire