Apple changed the game when it launched the original iPhone in 2007. It introduced us to multitouch displays, usable mobile web browsing, and, sadly, non-removable batteries. The latter trend has spread throughout the smartphone industry, becoming the standard for almost all phones in 2022. That might change if a newly proposed European Union policy goes into effect, and it could affect more than your phone.

Following on the heels of its decision to mandate the use of USB-C ports on most electronic devices, the European Union is considering a law that would require manufacturers to make it easy to swap batteries — that could mean removable batteries in smartphones again. The overhauled rules on batteries are aimed at reducing waste and pollution. Three and a half years after passage, the law would require companies that make portable battery-powered devices to ensure their products have batteries that are “easily” replaceable by consumers.

It’s unclear just how “easy” a replacement would have to be to comply with the law, but today’s smartphones undoubtedly fall short. Most devices from Apple, Samsung, Google, and others require separating glass panels, melting adhesive, and prying up batteries in order to replace the cell. While it’s possible to do this yourself, and some companies even offer kits to help you do it, the risk of damage to your phone is very real. There are numerous reasons for this approach, not least of which it encourages people to upgrade their phones sooner, but integrated batteries also allow for sleeker body designs and higher battery capacity. 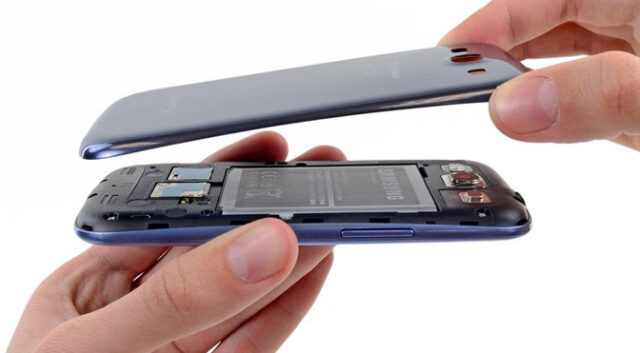 Removable batteries, like the one in the Galaxy S3, used to be common.

In addition to requiring replaceable batteries, the law would oblige manufacturers of electronic devices to accept batteries for recycling. By 2030, the European Commission is directed to assess the feasibility of ending sales of non-rechargeable batteries entirely.

These rules would only be enforced in the EU, but companies are unlikely to build separate pieces of hardware for Europe. So, as with the USB-C mandate, we may all benefit from Europe’s initiative. Portable batteries are just one area impacted by the proposed law — it could have an even greater impact on transportation. Automakers selling electric vehicles would have to assist with recycling efforts and allow consumers to swap electric vehicle batteries, too. This could help blunt the environmental and financial drawbacks of EVs at a time when regulations are pushing consumers in that direction. The European Parliament could choose to take up this regulation at any time now that the Commission has submitted its proposal.

Horror Halloween Fashion and Decor to Shop For