Today is Intel’s big event: Intel Innovation. There, CEO Pat Gelsinger announced pricing for its much-anticipated products, including its 13th Gen CPUs and its flagship GPU. The TL;DR summary is Intel is offering extremely aggressive prices to compete with AMD on the CPU front, and with Nvidia on the GPU front—giving it a surprising advantage in its upcoming battle with the red and green teams.

On the GPU front, Gelsinger announced the company’s flagship GPU would be priced at a surprisingly low $329. It was previously rumored the company would position it somewhere in the $300 to $399 range, but most of us figured it’d be somewhere at the higher end.

This puts Intel in an incredibly competitive position to go up against the RTX 3060 and Radeon 6600 XT. Both of those GPUs are around $400 now, give or take a fire sale here or there. Plus, this GPU can be outfitted with either 8GB or 16GB of memory, but it’s not clear if this price is only for the 8GB version. Intel is positioning it as the ultimate GPU for 1440p gaming, opting to not compete in the 4K arena with the RTX 3090 and Radeon RX 6900 XT. The big question is whether Intel’s software is ready for broad deployment. We will find out when it launches on Oct. 12.

Raptor Lake’s specs have already been leaked, by Intel, so there are no surprises there. Now, and on the heels of yesterday’s Zen 4 launch, Intel has announced very aggressive pricing for Raptor Lake (via The Verge). The top of the stack is as follows:

Notably, the 13900K is a lot more affordable than the Ryzen 9 7950X, which costs $699. Both are 32-thread CPUs. Intel says its 13th CPUs offer big gains over Alder Lake, including a 15 percent single-core uplift and a 41 percent multi-core performance improvement. Additionally, these processors will work on older 600-series motherboards, and DDR4 is still supported. This is not the case with AMD’s new AM5 platform, so upgraders on a tight budget will likely be giving Intel a close look this time around. 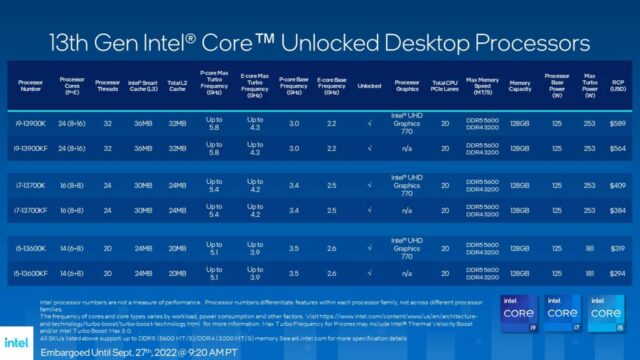 Raptor Lake CPUs will become available on Oct. 20, setting up an epic showdown with AMD’s Zen 4 chips. Both companies are pushing power limits to new heights this time around, so it’s about to get toasty on the test bench. Intel is going way beyond what AMD is allowing, however, with reports it has an “extreme power” mode allowing up to 350W of power consumption. AMD is “only” going up to 230W, but Intel is taking it even further. That mode will likely require a chiller or some kind of exotic cooling, however.

Intel has also talked about releasing a 6GHz CPU, but that will come at a later time. In its official Raptor Lake release, the highest frequency is 5.8GHz for the i9-13900K. That sounds like a “KS” CPU is waiting in the wings, likely to tackle a future Zen 4 chip with V-Cache.

Can you order Starbucks a day ahead of time?