This site may earn affiliate commissions from the links on this page. Terms of use.
(Photo: Image: Walden Kirsch/Intel Corporation)
Intel has a lot of lakes in its CPU roadmap, so it can be a challenge to keep them all straight. It’s currently offering Raptor Lake, which will be followed by Meteor Lake. After that, there’s Arrow Lake, and after that will be Lunar Lake, probably around 2025 or so. So far details about this architecture have been a bit foggy given how far out it is. However, Intel has now confirmed it will feature an entirely new microarchitecture, built from the ground up with a focus on performance-per-watt. This will be a product category operating around 15W, so it’ll be going into thin-and-light notebooks and low-power devices.

News of Intel’s plans comes from Dr. Ian Cuttress, formerly of Anandtech. He posted on Twitter that the EVP and GM of Intel’s Client Computing Group, Michelle Holthaus, had confirmed the news to him. Intel will be revealing more on Jan. 26 when it announces its 4th quarter financial results. Intel typically carries over its core processor technologies, pardon the pun, from one generation to the next, while iterating to improve performance and efficiency. We’re seeing that now with the move from Alder Lake to Raptor Lake, where Intel kept the same design but improved its P-cores going from Golden Cove to Raptor Cove. It kept the Gracemont efficiency core design and just added more of them to some SKUs. 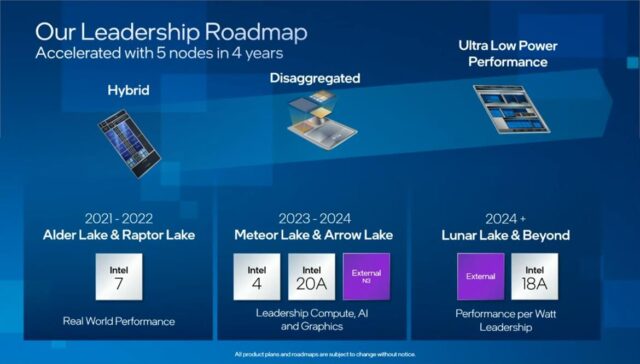 As you can see above, Lunar Lake is at the tail end of its current roadmap, so we don’t know what lies beyond. It’ll be a “disaggregated” design like Meteor and Arrow Lake with tiles, and it will be fabricated on Intel’s most cutting-edge node, dubbed 18A. By this point, Intel will have moved beyond FinFET and will be using RibbonFET transistors with PowerVia backside power delivery. It’ll also feature Intel’s Foveros technology, which will allow for vertical stacking of tiles instead of placing them side-by-side. 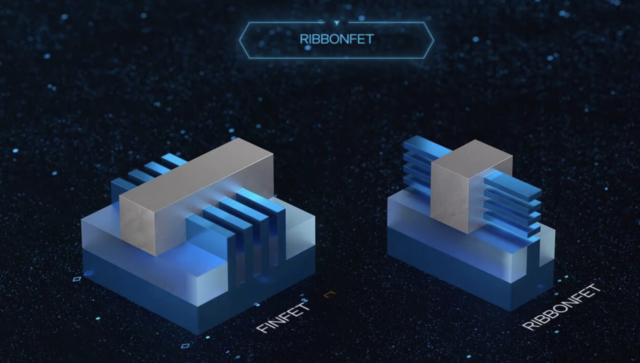 Intel’s will transition from FinFET to RibbonFet transistors around 2024 or so. (Image: Intel)

One curious thing about this announcement is whether there will be a desktop counterpart. Since Intel’s focus seems to be on low-power mobile parts, it’s possible it could launch close to Arrow Lake. That will reportedly include desktop SKUs similar to Raptor Lake, with 24 cores and 32 threads. The timing for that all depends on whether it can ever get Meteor Lake out the door. That CPU will be its first tile-based design. That product has faced numerous delays over the years, and Raptor Lake only exists because of those delays.

Since it’s a clean-sheet design, Lunar Lake will offer an all-new CPU, GPU, and VPU. It will also include Intel’s second generation Xe GPU. Intel is promising all-day battery life for Lunar Lake despite the low power targets, according to Videocardz. By 2025 that would be a trivial matter because we have that now on both PC and Mac. Still, many more laptops are sold than desktops, so it’s a crucial market for Intel. We’ll apparently find out much more about Lunar Lake in a few weeks, so stay tuned.

What is Cyber Security and Why is it Important