Back in April last year, Dell introduced an all-new type of memory module for some of its mobile workstations. It was dubbed CAMM, which stands for Compression Attached Memory Module. We publicly complained that it was something “proprietary” to Dell at the time, which it was. However, it now appears it’ll be adopted across the industry as the new standard for memory in laptops. It will replace SO-DIMM, which has been the standard for 25 years. This is a huge shift in the mobile industry, but CAMM seems like a worthwhile successor.

JEDEC, the industry group that homologates memory standards, approved the switch to CAMM. One reason was that SO-DIMM was about to hit a brick wall in memory speeds with DDR5/6400. This could allow CAMM to step in when the industry moves ahead with DDR6, sometime in 2024 or so. 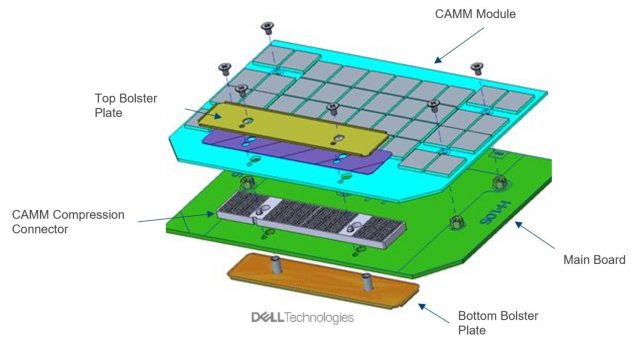 But the main benefit of CAMM is that it takes up less space than SO-DIMM–a big deal for laptops. Dell claims it’s 57% thinner, so it’s a significant savings. It also moves from offering two replaceable modules to just one, but that single module can hold up to 128GB of DDR5 memory. The modules are also swappable too, but unlike SO-DIMM where you could just add a second stick (if a slot was empty), you can’t do that with CAMM. It also allows for higher densities and clock speeds than SO-DIMM. Another big advantage CAMM has is it could allow for swappable LPDDR6 modules. These low-power sticks were previously always soldered onto the motherboard and used in thin-and-light machines.

News of JEDEC’s approval comes from Tom Schnell, who is a Dell Senior Distinguished Engineer. He is a JEDEC committee member and also helped create CAMM for Dell. Mr. Schnell told PCWorld that JEDEC will introduce the CAMM Common Spec as the replacement for SO-DIMM. Currently, the committee is working on the initial 0.5 spec and will continue to tinker with it until it gets to version 1.0. That will probably arrive in the latter part of this year, meaning we’ll see it implemented in laptops in 2024. Schnell said there were more than 20 companies involved in the vote, and it was a unanimous decision. Overall JEDEC has 332 companies in it, but their involvement varies according to their specialty.

Although we didn’t like it being a specific Dell technology when it was announced, it now seems like the right direction for the industry. SO-DIMM has been around literally for ages and was about to become obsolete as memory speeds continue to increase. Since it’ll be adopted industry-wide, we’ll also theoretically have many options when shopping for memory upgrades. It certainly appears as if Dell was ahead of the curve on this one, and for that it deserves kudos. It’ll be interesting to see if the spec changes at all as it’s hammered out this year by all involved.