It might feel as though Windows 11 just came out yesterday, but Microsoft is already hard at work on its operating system’s next iteration. At Friday’s Ignite 2022—Microsoft’s annual development and innovation conference—the tech giant briefly showed a never-before-seen Windows interface, and it’s thought to be Windows 12.

The tease occurred during the Ignite Keynote, a kick-off address covering the conference’s central themes and priorities. During a cutaway involving Microsoft Teams, viewers got a brief glimpse of an unfamiliar desktop with a floating taskbar and system icons in the top right corner. Screenshots show a floating search bar at the top center of the screen and weather in the top left corner.

The design is a far cry from Windows 11, which maintains Microsoft’s static taskbar (where system icons are also tucked away) and leaves the top of the screen totally bare. Keynote viewers immediately caught the discrepancy and took to Twitter, where they pondered whether the interface had anything to do with Windows 12, which is expected to roll out sometime in 2024. Some even pointed out that the interface echoes some core elements of the recurring macOS design.

Windows Central senior editor Zac Bowden has seen a few of Microsoft’s experimental designs for Windows 12, and the interface spotted during the Ignite Conference looked a bit familiar. Microsoft is still figuring out what it wants to do with Windows 12 (which Bowden says is referred to as Next Valley internally), but there could be some confluence between the leaked design and those being tested behind closed doors. Better yet, according to Bowden’s sources, the interface is “representative of the design goals that Microsoft is hoping to achieve with the next version of Windows.” 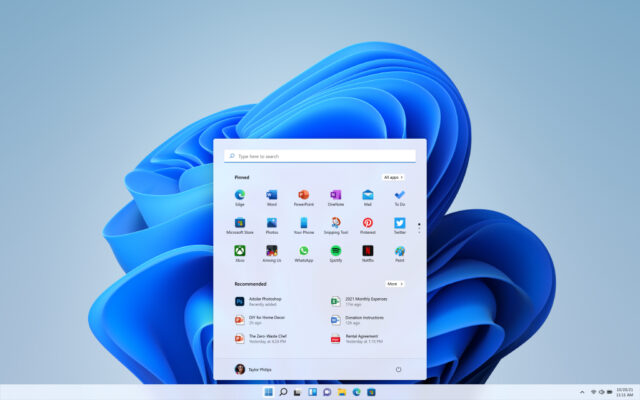 Windows 11 keeps the taskbar anchored to the edge of the screen, with system icons and the time displayed in the bottom right. (Image: Microsoft)

With that, it’s safe to assume the interface displayed at Ignite could have something to do with Windows 12, even if the final OS looks a bit different. But did Microsoft mean to offer fans such an early peek? Some “leaks” are intentional, as is widely suspected to be the case with the Xbox streaming device revealed last week. (After all, Microsoft gaming CEO Phil Spencer did the same thing in 2020 with the Xbox Series S.) This could easily be the case with Windows 12. Ignite has been going on in some form since the 90s, garnering hundreds of thousands of views globally in recent years. It’s unlikely that the teams responsible for preparing Ignite materials would be so sloppy as to accidentally display a top-secret OS. Plus, Microsoft has some experience with controlled leaks.

Intentional or otherwise, the teased interface gives viewers an idea of what they can expect from Microsoft in the coming years. Bowden’s sources say Microsoft is hoping to develop an OS more conducive to touch without sacrificing any part of the mouse-and-keyboard experience—a balance the company has struggled to find in the past. Not only does this have OS implications, but it might say something about Microsoft’s hardware goals too, especially as it continues to iterate on its two-in-one Surface device.

Netflix with ads launches Nov. 3, will be missing up to 10% of Netflix catalog

Most popular stories on GeekWire for the week of Oct. 9, 2022 – GeekWire

Most popular stories on GeekWire for the week of Oct. 9, 2022 – GeekWire

AM radio vs. digital audio; robot umpires; and Amazon cuts the line – GeekWire

Why is Starbucks cutting employees hours?