This site may earn affiliate commissions from the links on this page. Terms of use.
(Photo: Kamil S/Unsplash)
Xbox and PC gamers might soon have the option to reduce their machines’ energy consumption—if they can handle the trade-off, that is. Based on a new Xbox Insider Program survey, Microsoft is eyeballing energy-saving game modes that would bump down the frame rate and resolution in exchange for a lighter electricity bill.

The survey, first spotted by Windows Central this week, starts innocently enough by asking Insiders about their preferred gaming devices and session lengths. After another question about single-player or multiplayer preference, the survey delves into Insiders’ setting adjustments and energy consumption concerns. It’s the last two questions that really reveal Microsoft’s intentions, though: One asks how gamers would feel about energy-saving modes that “optimize” resolution, visual effects, frame rate, or GPU usage, while the other asks how they’d feel if individual games adjusted these settings while idle or inactive. 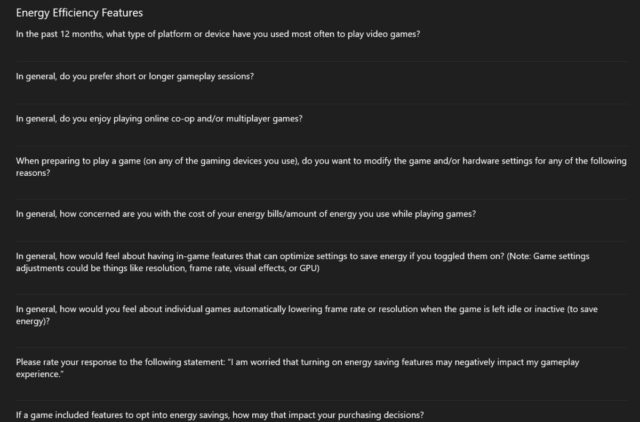 Energy consumption is top-of-mind for many these days. Not only are more people worried about their carbon footprint than ever before, but energy grid crises are forcing families to reckon with blackouts and increased electricity costs. According to a recent report from The Verge, Xbox energy saver modes can save gamers up to £5 (approximately $5.75 USD) per month in the United Kingdom—not a massive figure by any means, but still one that adds up over time.

Microsoft’s apparent desire to mitigate these costs and environmental impacts is impressive, especially when considered alongside other recent efforts to make its products more energy efficient. A new version of the Xbox Series S and Series X power settings menu visually illustrates the energy saved under different power modes. Earlier this year Windows 11 added an “eco evaluation” item under system settings, revealing a machine’s energy expenditure, available conservation modes, and a handful of planet-preserving usage recommendations. The new operating system even tells users how to properly dispose of their machines when the time comes.

That said, it’s hard to imagine most dedicated gamers giving up valuable pixels and frames-per-second to save a couple bucks each month. If you’ve spent hundreds (or thousands) on a console or PC, a big monitor or TV, and other gaming accessories to make the experience as enjoyable as possible, minor savings probably won’t convince you to abandon your setup’s entire purpose. Xbox Insider surveys don’t always mean the explored additions will make it to market, but if this one does, it might end up being a waste of Microsoft’s time.

Is Starbucks an easy place to work at?