This site may earn affiliate commissions from the links on this page. Terms of use.
(Photo: Kathy Servian/Unsplash)
Monarch butterflies are teetering on the edge of extinction, scientists say—and they’ll be gone soon if we don’t act fast.

The International Union for Conservation of Nature (IUCN), a group of government and non-profit organizations working to “safeguard the natural world,” announced the monarch butterfly’s endangered status in late July. IUCN maintains something called the Red List, which is often regarded as the world’s most comprehensive scale upon which animal, fungi, and plant species’ conservation statuses are assessed. The list distributes species into nine categories: not evaluated, data deficient, least concern, near threatened, vulnerable, endangered, critically endangered, extinct in the wild, and extinct. As of writing, the Red List contains 147,517 species; 41,459 of them, now including the monarch butterfly, are endangered or worse.

The IUCN says deforestation has exacerbated what was previously a gradual, climate change-spurred decline in the species’ population. Fewer trees mean less shelter for the migratory butterflies, which normally spend time in California and Mexico during the winter. Agricultural pesticides and insecticides kill both monarchs and the milkweed their larvae feed on. Milkweed already faces enough difficulty between wildfires and drought; lackadaisical agricultural practices make it even tougher for the vital food source to survive.

The western monarch population (which is categorized as west of the Rocky Mountains) appears to be most at risk of extinction. The IUCN estimates this population has decreased by 99.9 percent between the 1980s and 2021, leaving only approximately 1,900 monarch butterflies behind. Meanwhile, the eastern population shrunk by about 84 percent between 1996 and 2014. 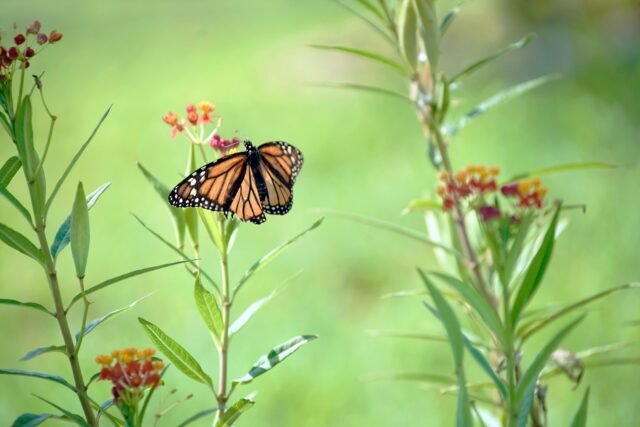 When considered alongside the shaky bee and bat populations, these figures are grim. Empathy aside, pollinators are vital to entire ecosystems and foodways. Their extinction would mean the loss of animals and plants that contribute to the modern diet, as well as many floral species that currently add color and character to the overarching landscape. The loss of monarchs would in effect create a ripple effect that would drastically change how humans and other species live.

But according to the IUCN, the monarch situation isn’t yet hopeless. Other endangered species have made slow yet exciting comebacks. (The IUCN points to the increasing tiger population as an example, but it’s also seen the southwestern black rhino population gradually rise.) Enhanced data-gathering techniques can help scientists maintain the visibility of the monarch population and inform conservationists’ protection efforts.

The World Wildlife Fund reports that despite a longitudinal decline, an encouraging 35 percent increase in eastern Mexico’s monarch population was recorded between December 2020 and December 2021. Some agriculture-heavy regions, like California, are working to eliminate pesticides that pose a danger to pollinating insects. Individuals can have a small yet mighty impact on their local monarch population, too. The concept of “wilding” one’s yard—or replacing water-guzzling lawns with native plants that flourish naturally and support pollinators—is gaining popularity in various corners of the world as homeowners find ways to jive with their local ecosystems.

“It is tragic to see one of the world’s most well-known butterfly species, with remarkable migratory behaviors and local cultural significance, threatened with extinction,” said Sophie Ledger, a researcher at the Zoological Society of London and member of IUCN’s Special Survival Commission Butterfly and Moth Specialist Group. “Considering the current global biodiversity crisis, it is critical to uncover what is happening with diverse and functionally important species such as these before it’s too late.”