As NASA prepares to return to the moon, all eyes are on the delayed Artemis 1 launch that will mark the first mission for the Space Launch System (SLS). Well, almost all eyes. The first phase of Artemis requires a tiny spacecraft called CAPSTONE, which ran into some trouble a few weeks back. Now, NASA’s commercial partner Advanced Space reports that CAPSTONE has righted itself and is on target to reach the moon this month.

CAPSTONE, or the Cislunar Autonomous Positioning System Technology Operations and Navigation Experiment, is essentially a beefed-up cubesat. It has a total mass of just 55 pounds (25 kilograms), but it’s got a big job to do. NASA intends to begin construction of an orbiting moon base in the latter half of this decade, and CAPSTONE is on its way to the moon to test an innovative new orbit for the station that should allow it to remain in contact with Earth at all times.

This first Artemis mission began smoothly thanks to Rocket Lab’s Electron rocket, but an issue cropped up in September following the vessel’s planned third maneuver. According to Advanced Space, which manages CAPSTONE for NASA, the satellite was stuck in a tumble that left it unable to contact Earth and drained more power from the batteries than it could generate from its solar panels. Luckily, the team was able to get CAPSTONE stabilized enough that it could begin charging as it approached the fourth maneuver in late October. 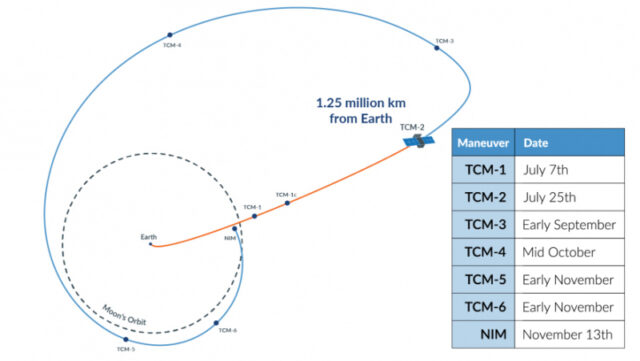 Advanced Space confirms that CAPSTONE completed that course correction late last week, and the previous stability issues have been rectified. The engine burn lasted for 220 seconds when the probe was 308,076 miles (495,800 kilometers) out from Earth. That’s past the orbit of the moon, but its swooping path will eventually deliver it to near rectilinear halo orbit (NRHO). This tilted orbit will see CAPSTONE (and hopefully the future Gateway station) pass over the moon’s north pole at an altitude of 47,000 miles (76,000 kilometers) and just 2,100 miles (3,400 km) over the south pole.

CAPSTONE has a busy month in store now that the previous trajectory issues have been fixed. With two more small nudges from the engines, the satellite is expected to arrive in NRHO around the moon on November 13th. Its primary mission will last at least six months after reaching the moon, during which time NASA will use its telemetry to validate the orbit. The first parts of the proposed Lunar Gateway could head out as soon as 2024, but given the delays in getting Artemis I off the ground, it could take longer.

Why big data is not a priority anymore, and other key AI trends to watch – GeekWire

Why big data is not a priority anymore, and other key AI trends to watch – GeekWire

How Social Media Can Help Us All