This site may earn affiliate commissions from the links on this page. Terms of use.
(Photo: Bank Phrom/Unsplash)
The last few years have been chock-full of large-scale, stressful events. (I don’t need to name them—the list would be too long, and if this story interested you, you’re probably already familiar.) Combined with virtually universal daily use of the internet, this has made for a relatively unique problem: being aware of almost every major event occurring around the world, all the time.

One doesn’t need a college degree or a stint in the lab to realize that this might be a problem for our collective mental health. To cement that rationale, researchers from Texas Tech University conducted a study using survey data from 1,100 United States adults to examine whether constant news exposure negatively impacted people’s health. They found that about 16.5 percent of Americans consume the news on a “severely problematic” basis. (For the sake of the study, “severely problematic” referred to compulsive news-checking that interfered in some way with a person’s life.) More than half of them experience physical illness that correlates with or is caused by such consumption. Even worse, 73.6 percent of them experience diminished mental wellness. From fatigue and gastrointestinal issues to stress and anxiety, those who were constantly in the loop were taking a hit to their physical and mental health.

Because their statistical findings essentially confirmed what many already suspected, the researchers focused less on the fact that “news junkies” experienced diminished health and more on why this tends to occur. They first cited the concept of “transportation,” in which someone reading or watching content becomes “fully immersed in a narrative world.” While the term transportation is usually applied to fiction, the researchers found that modern news stories, being designed to catch attention and often being multimedia, can make one susceptible to transportation too.

“This is not surprising given that news stories are intentionally selected and presented in a manner that highlights the presence of conflict and drama as a means to capture and hold the audience’s attention,” they write in the journal Health Communication. “Like entertainment content, the news typically uses a storytelling format that features a plot revolving around heroes, victims, and villains, which can lead individuals to become transported into these narrative worlds.” 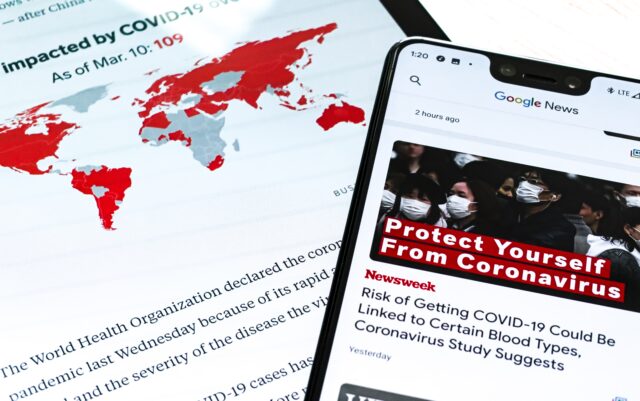 Transportation is a gateway of sorts into preoccupation, in which an already completed activity dominates one’s thoughts. After consuming a news story, some people “tend to ruminate and continuously worry about stressful events or imagined futures.” (Fear of another global pandemic is a common one these days, as is ruminating about the chance of nuclear war.) If the consumption-transportation-preoccupation cycle continues, it could be considered misregulation, or a failure to sufficiently self-regulate one’s news consumption.

The researchers point out that misregulation is often the result of attempting to “regulate short-term affect,” meaning the person believes looking at more news might help in the short term. (Sticking with our previous example, this could mean looking up reasons not to worry about nuclear conflict…and then seeing stories with conflicting information, resulting in increased anxiety.) In some cases, the researchers note, this can result in “a downward spiral of increasing dysphoria”—what many of us refer to as “doomscrolling.”

Perhaps the most problematic result of news over-consumption is interference, in which one’s failure to regulate their news consumption has an effect on other parts of their life. This might be characterized as the point in which the news, excessive consumption of the news, or one’s reaction to the news impacts their relationships. It might also decrease their ability to work, study, relax, or sleep. These people make up the 16.5 percent of survey participants referenced earlier.

The researchers note that more investigation will be required to determine what makes some people more resilient against news over-consumption than others, as well as how some people are better at mitigating the effects of news over-consumption in a healthy way. In the meantime, if you’re someone who doomscrolls, it isn’t exactly a bad idea to limit your time spent looking at the news (or social media, where news stories frequently manifest). Think of it as a gift to your brain and your body.

What is a 25 year span called?