Our Search for Habitable Planets Just Got a Lot Narrower, Study Suggests

In the past few decades, astronomy has gone from speculating about the existence of planets outside our solar system to identifying more than 5,000 of them. Now, the hunt for habitable exoplanets is on, but we may have a smaller pool of possible candidates, according to a new study from researchers at the University of California, Riverside. After analyzing a nearby exoplanet, the team has concluded it is unlikely that the most common type of star in the Milky Way is capable of supporting life as we know it.

The study focused on an exoplanet called GJ 1252b, which orbits an m-dwarf star (sometimes called a red dwarf) just 66 light years away. That’s right next door in astronomical terms. These small, long-lived stars are so numerous that discovering habitable planets around them could mean a much higher chance of finding extraterrestrial life.

However, there’s one big problem: An exoplanet close enough to a red dwarf to have liquid water would also be subjected to intense radiation and unpredictable solar flare activity. Could such a world even maintain an atmosphere? The proximity of GJ 1252b provided the Riverside researchers with a chance to find out one way or the other.

Astronomers measured infrared radiation from GJ 1252b during a so-called “secondary eclipse,” when the planet passes behind a star that blocks both its light as well as light reflected from its star. The radiation readings suggested the exoplanet, which completes an orbit of its host star in just 12 Earth hours, has a surface temperature of 2,242 degrees Fahrenheit (1,226 degrees Celsius). That’s hot enough to melt gold, silver, and copper. This led the researchers to conclude that GJ 1252b does not have an atmosphere. 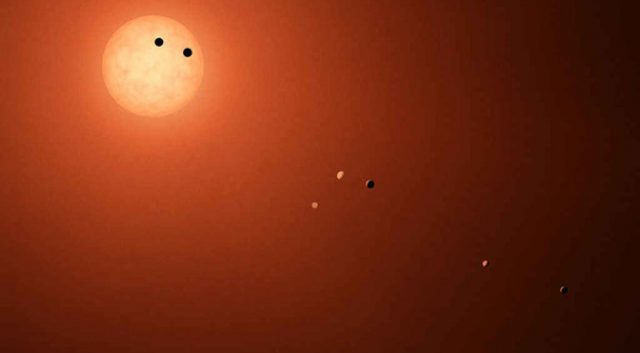 The Trappist-1 system consists of several rocky planets orbiting an m-dwarf star. The Webb telescope will soon conduct new observations of these worlds.

Further, the team calculated what it would take for the exoplanet to have any atmosphere whatsoever in the face of such intense solar activity. Even with carbon levels 700 times higher than Earth, they estimate GJ 1252b would still have its atmosphere stripped away. “It’s possible this planet’s condition could be a bad sign for planets even further away from this type of star,” says Riverside astrophysicist Michelle Hill.

This doesn’t mean habitable planets are out of the question, though. While most of the 5,000 stars near Earth are m-dwarfs, about 1,000 are similar to the sun and could potentially host Earth-like planets. And the universe is a big place — there are always more stars to survey, and new instruments like the James Webb Space Telescope will help us observe them in greater detail than ever before.

Who are the weather people on Fox 2 Detroit?