This site may earn affiliate commissions from the links on this page. Terms of use.
(Photo: Chuttersnap/Unsplash)
Thanks to a new combination of nerve stimulation and physical therapy, a group of people with severe or complete paralyzation have regained their ability to walk. Research out of Switzerland has identified the specific nerve groups that can be “reactivated” by electrical stimulation to restore motor function, changing the lives of those who once thought they’d never walk again.

Paralysis is often the result of a spinal cord injury. When the spinal cord experiences a severe physical trauma, neurons are damaged, which sometimes leads to a reduced or complete loss of ability to transmit signals from the brain to other parts of the body (and vice versa). Injuries to the lower (or lumbar) spinal cord have the ability to inhibit one’s ability to walk, since the nerves there are directly involved in lower body motor function.

This used to mean nearly anyone with a severe lumbar spinal cord injury would be resigned to a life of no walking, running, or other physical functions we often take for granted. But research from the last decade has suggested that epidural electrical stimulation (EES) might help to bring damaged and nonfunctional neurons “back to life.”

Neuroscientists and surgeons from the Swiss research group NeuroRestore published a study on Wednesday examining the effects of EES on paralyzed people’s ability to walk. The team recruited nine total participants, six of whom had severe or complete motor paralysis but had maintained some sensation in their legs, and three of whom had complete motor and sensory paralysis. All of them were surgically fitted with some form of “paddle lead,” or an array of electrodes that are insulated on one side to avoid stimulating nonessential tissues. The participants then underwent five months of EES while standing, walking, and performing other exercises at least four times a week. 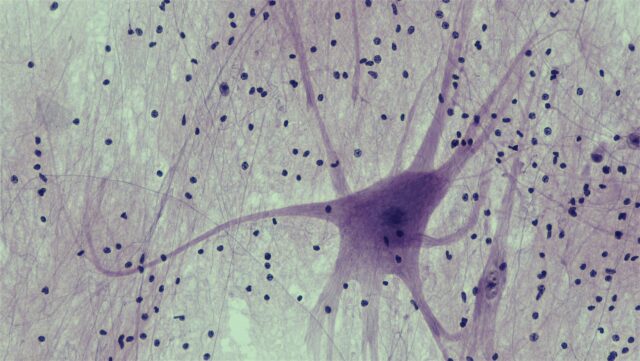 Over this five-month period, participants saw an increase in their legs’ weight-bearing capabilities, which eventually enabled them to take steps with a walker or other assistive device. The researchers even witnessed a decrease in neural activity as each participant’s motor abilities grew stronger. This, they say, aligns with the nervous system’s response during the adoption of any other skill: As a person gets better at something, the nervous system doesn’t have to work as hard to execute that action.

The researchers were able to replicate these findings in mice. Using RNA sequencing and a gene-mapping technique called spatial transcriptomics, the team found a previously unknown type of neuron (SCVsx2::Hoxa10) that appears to be key to the success of EES. Following a spinal cord injury, electrically stimulated SCVsx2::Hoxa10 seem to be capable of “taking over” the process of relaying messages from the brain to the lower extremities. Further, when SCVsx2::Hoxa10 were suppressed in mice, the mice were unable to regain their ability to walk—even after undergoing EES.

To say that NeuroRestore’s findings have the potential to be life-changing would be an understatement. If treatment like NeuroRestore’s iteration of EES were to become widely available, it could transform the lives of millions in the United States alone. As with any other groundbreaking treatment, however, it’ll be quite some time before this particular brand of nerve stimulation is offered to everyday patients.

Most popular stories on GeekWire for the week of Nov. 6, 2022 – GeekWire

Most popular stories on GeekWire for the week of Nov. 6, 2022 – GeekWire