Qualcomm Will Enable Satellite SOS on Flagship Android Phones in 2023

Apple released the iPhone 14 last year with a nifty new feature: satellite communication. The iPhone “Emergency SOS” feature relies on Globalstar’s new satellite constellation to send messages to emergency services when the situation is dire, but what if you don’t have an iPhone? Qualcomm has just announced a similar feature for upcoming high-end Android phones, but unlike Apple, Qualcomm is using the Iridium network that has been handling mobile satellite communication for more than 25 years.

You’ve probably seen Iridium satellite phones over the years — they usually have huge external antennas and brick-like form factors. Qualcomm says that it has found a way to enable two-way communication with Iridium satellites and modern smartphones without a new antenna. Iridium works over the 1-2 GHz L Band, which is the same frequency used for GPS. Your phone already has an antenna for this, but it’s not going to work as well as dedicated Iridium phones with external transmission hardware.

Like Apple’s Emergency SOS, Snapdragon Satellite will require you to hold the phone skyward and wave it around to find a good connection. Even then, you won’t get voice service. Snapdragon Satellite is limited to SMS messaging, but you do get the choice of texting emergency services or sending messages to a whitelisted contact. Qualcomm’s setup does allow for customization; a service provider could enable other messaging standards like WhatsApp instead of SMS. 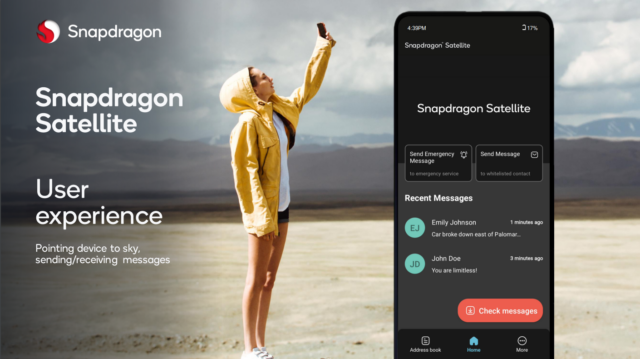 Qualcomm VP Francesco Grilli says the experience is “closer to 2G than 5G,” reports Ars Technica. It’s a TDMA (time-division multiple access) system, meaning each connected user requires a dedicated satellite antenna. There are multiple antennas on each Iridium orbiter, but this limits the capacity of the network. On average, it will take three seconds to send a full SMS message, but it could take 10 seconds or more if you need to wait in a queue. That’s still better than the iPhone, which takes about 15 seconds to send a compressed message to emergency services.

Snapdragon Satellite will debut in the Snapdragon Gen 2 chip, which will power many of the top Android phones in 2023. OEMs have to plan for this feature, and Qualcomm says there are already several manufacturers doing so. Qualcomm just makes the chips, though, so you can expect network operators to charge some sort of fee for the service. We’ll find out for sure when the first Snapdragon Satellite-enabled devices launch in the second half of 2023. While the feature will be limited to high-end phones at first, Qualcomm has not ruled out adding satellite support to more chips in the future.

Is there a word for every 3 years?