If you needed a bit more proof that the integrated heat spreader (IHS) on the new Ryzen CPUs is too thick, here it is. An enterprising YouTuber has sanded it down a bit, and the results were instantly lower temperatures. This is not much of a surprise since previous experiments showed similar results. It does seem to confirm that AMD has errored in its design of the IHS on its Zen 4 CPUs. By removing almost 1mm from the top and using a certain thermal paste, temps went down 10C. This will void your warranty, so proceed with caution.

To recap a bit, AMD has designed its latest CPUs to hit their thermal peak almost instantly under stress. Under heavy workloads, it’ll hit 95C in less than 10 seconds. AMD says “this is fine,” like in the meme with the room on fire, but many enthusiasts aren’t comfortable with that temperature. Normally you’d think there was something wrong with your cooler or CPU if it was hitting 95C on a regular basis. Despite AMD’s reassurances, enthusiasts have been trying to find ways to bring these temps down. Previously German overclocker der8auer took temps down 20C by delidding the CPU. That is a dangerous experiment, though, and it can easily kill the CPU. Now YouTuber Jayztwocents has taken a similar step and sanded the IHS down a smidge in an attempt to lower temps. 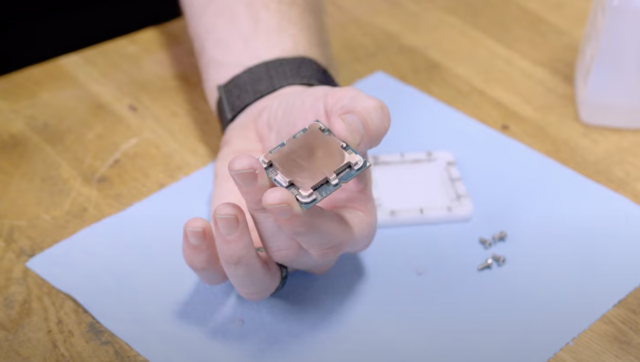 Sanding the top off the IHS exposes its copper underbelly. (Image: Jayztwocents)

Jay was aided in his quest to chill a Ryzen 9 7950X by der8auer’s lapping kit. This holds the CPU in place and allows the sander to ensure the final result is perfectly flat. Jay clamped the CPU into the frame and used a belt sander with 120 grit sandpaper to get started. With the top layer of the IHS removed and the copper underbelly exposed, he switched to a finer sandpaper to finish the process.

With the CPU reinstalled the next issue one has to overcome is the cooler’s mounting mechanism no longer works properly. With the CPU’s z-height reduced, you’ll need to use new screws to lock it into place. Jay found this out the hard way as he mounted the AIO to it just to see what would happen. Not surprisingly, temps skyrocketed immediately to 95C. This indicates poor contact between the IHS and the water block.

In the end, he was able to use the stock mounting hardware by just removing the rubber stoppers underneath the mounting screws. This allowed for several more millimeters of distance for the cooler to travel down toward the socket as the screws were tightened. Overall he removed 0.8 millimeters from the top of IHS. The maximum allowed by the custom lapping frame is 1.2 millimeters.

On the initial run with everything in place, temps did drop but not much. Instead of hitting 95C immediately, it lingered around 89C or so. In other words, it wasn’t really worth it. It was noted he was using Arctic MX-4 thermal paste. He switched to Thermal Grizzly Kryonaut Extreme and the temps dropped more. With the CPU under full load at 5.1GHz on all cores, it hovered around 85C. That’s a pretty surprising drop, both from lapping and just using a different thermal interface material (TIM).

With the Ryzen 9 7950X set to 5.4Ghz across all cores, it was able to stop at 90C. That’s still pretty hot, but 5C is still a decent drop. That was the end of the road for his experiment. He tried nudging clocks higher to 5.5GHz and it wouldn’t run. He did not lap the CPU all the way down though, leaving another 0.4mm of IHS intact. That might get you another few degrees of cooling, at best.

Overall, he says the experiment confirmed the thickness of the IHS is contributing to the high temps of Zen 4 CPUs. This was done by AMD to ensure compatibility with older AM4-based CPU coolers. That said, he doesn’t recommend voiding your warranty for a 10C reduction in temps. But if you’re the type of person who likes to live dangerously, the results speak for themselves.

US court rules, once again, that AI software can’t be listed as inventor on a patent