This site may earn affiliate commissions from the links on this page. Terms of use.
(Photo: Mufid Majnun/Unsplash)
Two major pharmaceutical companies are testing a personalized vaccine that might prevent the recurrence of a specific type of skin cancer. Moderna, one of the companies behind the COVID-19 vaccine, and Merck, an enterprise focused largely on oncology and preventative medicines, are teaming up to see if they can reduce the public’s risk of re-developing the deadliest form of skin cancer: melanoma.

The vaccine essentially combines two medical technologies: the mRNA vaccine and Merck’s Keytruda. As with the COVID-19 vaccine, mRNA shots don’t require an actual virus. Instead, they use a disease’s genetic code to “teach” the immune system to recognize and fight that particular illness. This makes it relatively easy and inexpensive for scientists to develop mRNA vaccines and edit them if a new form of the disease emerges. Keytruda, meanwhile, is a prescription medication that helps prevent melanoma from coming back after known cancer cells have been surgically removed.

Moderna and Merck are testing the feasibility of not only creating a two-in-one drug with both technologies but also customizing individual vaccines to suit their respective patients. Each vaccine is engineered to activate the patient’s immune system, which in turn deploys T cells (a type of white blood cell known to fight cancer) that go after the specific mutations of a patient’s tumor. Keytruda assists this effort by barring certain cell proteins from getting in the way of T cells’ intervention. 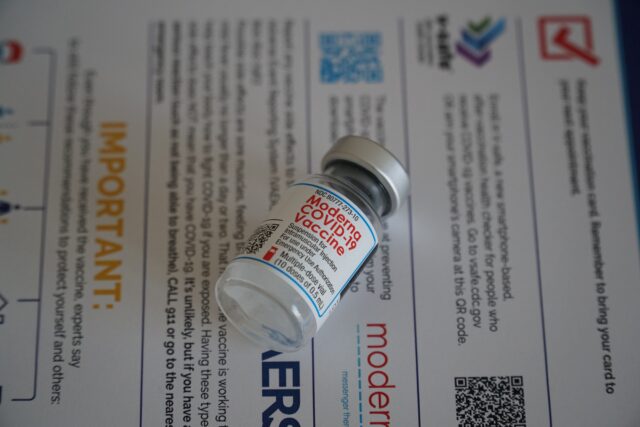 Moderna is best known for the COVID-19 vaccine, which is another form of mRNA vaccine. (Photo:

The experimental drug is currently in its second clinical trial out of three. The trial involves 157 participants with high-risk melanoma who just successfully underwent surgical removal. Some of the participants were given the personalized vaccine, while others were given Keytruda alone. Moderna and Merck will observe whether the participants’ melanoma returns over the span of approximately one year, with primary data expected at the end of this year.

This vaccine is different from one being tested by the University of Washington Cancer Consortium, and Seattle’s Fred Hutchinson Cancer Center in collaboration with Amazon. The latter focuses on late-stage melanoma or hormone receptor-positive HER2-negative breast cancer that has either spread to other areas of the body or resisted treatment. The drug is currently being tested for safety in a trial lasting through the end of 2023.

If a vaccine preventing the recurrence of melanoma does in fact become commercially available, it could prevent more than 7,000 deaths per year in the US alone.

Rent going up? One company’s algorithm could be why

Why Egypt became one of the biggest chokepoints for Internet cables