This site may earn affiliate commissions from the links on this page. Terms of use.
(Photo: NUS)
Most mouthguards are used to protect the teeth during contact sports and sleep. Thanks to scientists at the National University of Singapore and Tsinghua University, however, they’re gaining a new function: helping people with disabilities communicate.

Chemists and engineers from the two universities teamed up to create an optical fiber sensor-based mouthguard aimed at helping people control or operate devices via bite force. In a paper published earlier this month in the journal Nature Electronics, the scientists write that they combined optical sensors and mechanoluminescent materials to measure occlusive (bite) force in real time.

Central to the mouthguard’s function are several mechanoluminescence-powered distributed-optical-fiber (mp-DOF) sensors. Each sensor incorporates a series of elastomeric waveguides embedded with mechanoluminescent contact pads. The contact pads themselves contain phosphors that light up in different colors depending on where and to which degree mechanical pressure is applied. Using these color associations and their varying intensities, the scientists trained a machine learning algorithm to translate different bite patterns into specific data inputs. 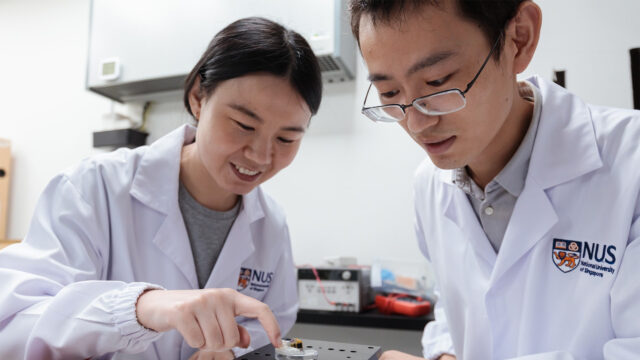 The team quickly put their invention to the test. In initial evaluations alone, the interactive mouthguard was found to translate the scientists’ occlusive patterns with 98 percent accuracy. It maintained this level of function when paired with other hardware, too: The team successfully integrated the mouthguard with computers, smartphones, and wheelchairs.

The interactive mouthguard is intended to be an alternative to existing assistive technologies based on voice recognition technology (like speech-to-text software) or eye-tracking interfaces (like that used by the late Stephen Hawking). Voice recognition technology isn’t practical for noisy environments or spaces in which silence is expected, and eye-tracking interfaces are expensive to acquire and maintain.

In contrast, the mouthguard is suitable for environments of all noise levels and costs only $70 USD to make—a figure the scientists expect to decrease in mass production. Depending on their physical abilities, neurological condition, and level of dexterity, some people might find the mouthguard a more convenient alternative to these technologies as well as to conventional hardware like keyboards and touch screens.

The scientists are now looking to test the mouthguard in real-world settings, like care centers or nursing homes. Meanwhile, the team is working on patenting their technology and developing a second-generation mouthguard. The new iteration will feature improved control speeds and adaptability to “irregularly-arranged” teeth.

Needl, a YC startup based in Seattle, raises $2.5M to build ‘a search bar for your entire life’ – GeekWire

Needl, a YC startup based in Seattle, raises $2.5M to build 'a search bar for your entire life' – GeekWire