(Credit: Valstar et al/Radiotherapy and Oncology)You’d think that existing exclusively within the human body would give way to a complete knowledge of the organs hidden within. Instead, we’re constantly discovering new parts of the weird and glorious biological machine we each call home. The latest in these discoveries are the “tubarial glands,” a pair of small organs responsible for producing saliva.

Oncologists from the Netherlands Cancer Institute in Amsterdam were conducting cancer research earlier this year when they happened upon the “new” glands. Radiation oncologist Wouter Vogel, oral and maxillofacial surgeon Matthijs Valstar, and their team have been working to improve the research community’s understanding of cancers occurring in the head and neck. They were using positron emission tomography (PET) and computed tomography (CT) scans—known for helping to track metastasizing prostate cancer—to study patients’ mouth, throat, and other cancers when the scans’ radioactive glucose lit up an unfamiliar part of the face.

Scan after scan, the same part of the patients’ faces continued to glow. Exactly 100 consecutive patients and cadavers possessed the same strange bright spot, prompting Vogel and Valstar to investigate. Contrary to what they expected, the spot wasn’t an anomaly—it was a whole new organ consisting of two salivary glands. 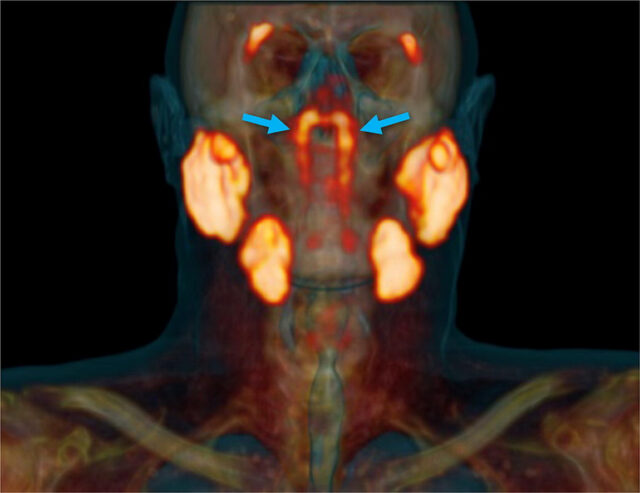 The team has dubbed the glands “tubarial glands” for their location within the body. They’re about the same size as the body’s three main salivary glands but sit on either side of the nasopharynx, which connects the nasal passages to the rest of the human body’s respiratory system. Most salivary and mucous glands within the nasopharynx are microscopic in size, which explains Vogel’s and Valstar’s surprise during the initial PET/CT scans.

The discovery is highly relevant to the team’s main oncological mission. Radiotherapy, which is used to kill cancer cells and shrink tumors, can trigger complications within salivary glands. “Patients may have trouble eating, swallowing, or speaking, which can be a real burden,” Vogel said in a statement.

Researchers at University Medical Center Groningen (UMCG) subsequently studied 723 cancer patients and found that increased radiotherapy correlated with increased salivary gland issues, including with the newly-discovered tubarial glands. As a result, radiotherapists will need to avoid delivering radiation to this portion of the body as they do with more familiar salivary glands.