[Ed: AMD has responded to some of these claims; see the bottom of the article for the update.]

AMD’s long-awaited RDNA3 GPUs launched on Dec. 13, and although they didn’t score a knockout victory over their rivals in early tests, they’re clearly worthy competitors. Their main flaw, reviewers noted, was lackluster ray tracing performance, to the surprise of exactly nobody. But now that the dust has settled and cards are in gamers’ hands, reports have surfaced online showing a variety of bizarre issues. The most troubling accuses AMD of shipping the Radeon RX 790 XTX with very early silicon with disabled shader prefetch hardware.

The above is still unverified at the time of this writing, but here’s what we know. The reports of weird behavior vary greatly, but the most egregious is being made by a @Kepler_L2. They found a line in the Github submission for AMD’s drivers that showed a shader prefetch is not working for “some” cards with the A0 revision. This applies to three chips: CHIP_GFX1100, CHIP_GFX1102, and CHIP_GFX1103. That first chip is Navi31, aka the 7900 series. The second chip is Navi33, which isn’t released yet. The third chip named is for APUs based on Phoenix, according to Wccftech. That would mean AMD fixed this issue for Navi32, aka Radeon RX 7800, etc. The A0 revision is early silicon, but according to Kepler_L2, it was shipped to consumers. Twitter users are furiously trying to figure out which cards feature this revision of silicon, and how widespread it is. 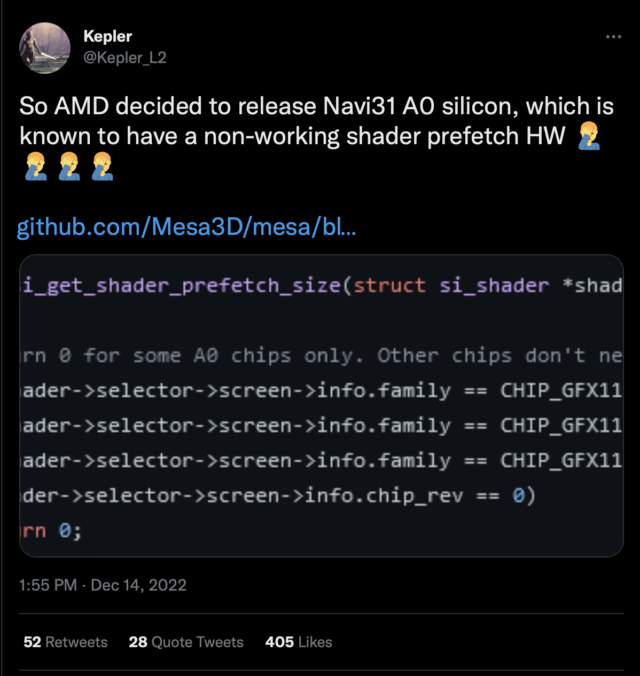 Another user named Davidbepo posted a similar situation with Navi31, where an XTX card showed two different steppings. In his tweet, the card is shown in GPU-Z as being C8 stepping, while also using A0 silicon. That is strange, as A0 would be the first revision of the hardware; it should have advanced for the final product. It’s possible AMD shipped early silicon with a broken shader prefetch in some cards. It’s seemingly also not working in Nav33, the company’s midrange GPUs. This isn’t verified yet, either, but if it’s true, AMD would need to ship new silicon to rectify it.

Other reports show wildly fluctuating clock speeds. Twitter user @uzzi38 reported the XTX’s clocks can fluctuate between 2.4GHz and 2.9GHz with no settings changed, which is quite a spread. They linked to Techpowerup’s efficiency benchmarks, which show an even wider level of fluctuating clock speeds. In those tests, the XTX displayed a 1GHz range of clock speeds, from 1,934MHz to 2,994MHz. Even worse, their card ran at 1.6GHz in Furmark. We’re all used to GPU clocks varying according to load and temps, but that is an unprecedented range in production. 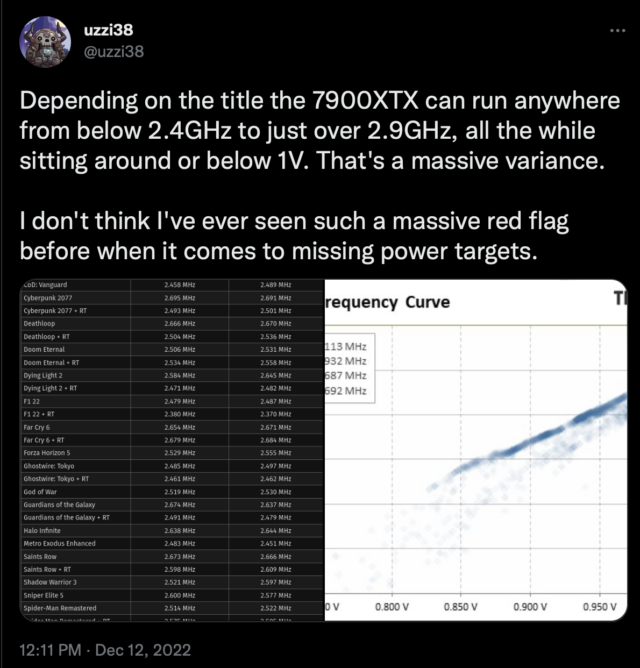 A tech YouTuber in the Netherlands named Nadalina found similar bizarre behavior on the Asus version of the XTX. She reports she ran Call of Duty at 350fps and 2.9GHz, which ran it faster than an RTX 4090. However, an hour later it dropped to 300fps and 2.4GHz, with no changes to any settings. Her GPU also produced some serious coil whine, but that’s why we have headphones we suppose. AMD graphics chief Frank Azor tweeted to her that the company would be in touch so they could try to figure it out, so it seems like something weird is happening. And TechPowerUp also noted its XTX was consuming over 100W of power sitting at the desktop with a multi-monitor setup, which is just weird.

This is all a mystery that we hope AMD can add some clarity to. The A0 stepping could be fixed with a hardware refresh, but that’s little consolation to current card owners. It’s been reported that the shader prefetch being disabled only causes a drop in performance of five percent with RDNA2. Given how different RDNA3 is in terms of architecture, it’s unknown what effect that has here. For now, we will have to wait to see if AMD chimes in.

Update 12/17/22 12:58 p.m.: An AMD spokesperson responded to the claims with the following statement to Tom’s Hardware. “Like previous hardware generations, shader pre-fetching is supported on RDNA3 as per [gitlab link]. The code in question controls an experimental function which was not targeted for inclusion in these products and will not be enabled in this generation of product. This is a common industry practice to include experimental features to enable exploration and tuning for deployment in a future product generation.”

So in other words, they were testing something, and it didn’t work, so they’ve disabled it. According to AMD, the shader prefetch is working as intended. Unfortunately, AMD sidestepped the question of whether cards with A0 stepping were shipped to consumers.

Cybersecurity in the Construction Industry

Ukraine Could Never Afford to Bet on Starlink