This site may earn affiliate commissions from the links on this page. Terms of use.
(Photo: Julien’s Auctions)
In what world would someone pay hundreds of thousands of dollars for a used pair of sandals? This world—when the user in question is one of the most famous tech founders of all time, that is. A pair of Steve Jobs’ Birkenstocks and an NFT “digital representation” of them have officially auctioned to an unnamed buyer for $218,750, making them some of the most expensive sweaty sandals on the face of the planet.

Los Angeles-based Julien’s Auctions is known for selling high-profile memorabilia, from hundreds of actress Betty White’s personal belongings to props from Jaws and Pulp Fiction. It makes sense, then, that a pair of Apple co-founder Steve Jobs’ sandals from the 70s would end up in Julien’s hands. The Birkenstocks were put up for auction on Friday. By the end of the weekend, they sold for just under $220,000, far exceeding the site’s estimate of $60,000 to $80,000. According to Julien’s Auctions, no other pair of sandals has ever auctioned for more.

Jobs is said to have worn the Birkenstocks when he and Steve Wozniak founded Apple out of a garage in Los Altos, California. Though Jobs was allegedly so fascinated with the sandals’ design that he contacted the woman responsible for bringing the brand to the United States, he eventually gave them to his house manager, Mark Sheff. They were in Sheff’s possession for some time before Jobs’ death in 2011; after that, Sheff allowed the sandals to be shown at museums and other exhibitions in Europe and the US. Now they’re the possession of one (lucky?) buyer, along with a one-of-its-kind NFT depicting a 360-degree view of the sandals in all their worn-out glory. 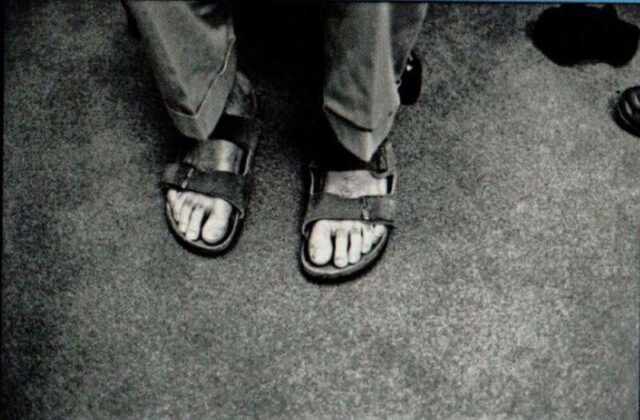 A photo of Steve Jobs’ feet in his newly-auctioned Birkenstocks. (Photo: Julien’s Auctions)

Whether or not you’re into Apple history, it’s difficult not to view the sale of Jobs’ Birkenstocks as a bit…unsettling. “The cork and jute footbed retains the imprint of Steve Jobs’ feet, which had been shaped after years of use,” the auction page reads. According to the auction house’s website, the sandals will be given to the buyer in a hard case for preservation and ease of transport.

Those who are disappointed about missing out on Jobs’ used sandals can still gaze longingly at the 16-second video of them spinning every which way on the bottom of the auction page. It’s not the same as feeling (or smelling) them in person, but at least you’re not out the cost of a Lamborghini or a small house.

Amazon begins layoffs of up to 10,000 jobs, blames “uncertain” economy

Can you get extra foam at Starbucks?