This site may earn affiliate commissions from the links on this page. Terms of use.
(Credit: AMD)
The last products to arrive in our end-of-year hardwarepalooza are the chiplet-based AMD Radeon 7900 series GPUs. The RX 7900 XTX and 7900 XT will officially go on sale Tuesday, Dec. 13. Whether you’ll be able to buy one on launch day is another story. In advance of the launch, our colleagues at PCMag have provided a brief photo diary of just how small the GPUs are compared with Nvidia’s latest. We knew they weren’t exactly huge at the product launch, but seeing them side-by-side with the RTX 4080 is interesting. They look old-fashioned, which is weird to say about cutting-edge technology.

Prior to the launch of the RTX 40 series, many people were rightly concerned with how big the cards might be. When they actually launched, peoples’ concerns were validated. Although the Founders Editions cards are roughly the same size as their Ampere predecessors, the partner cards are all gigantic. As in, “I’m going to need a new case” huge. Throw in a few of the GPUs melting due to a finicky new 12VHPWR adapter cable, and it was kind of a mess. AMD is sidestepping all that tomfoolery by using the same eight-pin PCIe cables we’ve been using forever. There are only two of them on the reference boards, but some partner cards will have three. 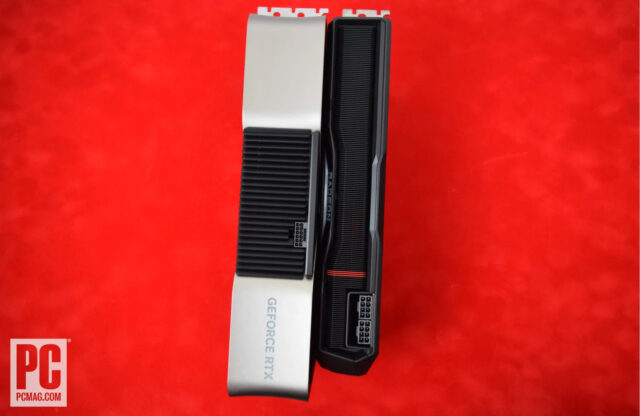 The RTX 480 has a lower TDP than the Radeon 7900 XTX, even though it’s substantially longer and thicker. The Radeon can suck down 355W, while the beefy RTX 4080 can pull a mere 320W. The Radeon 7900 XT sips just 300W. Both Radeon cards are almost the same size, with the XTX being a hair longer and wider. Both cards are the same height, however; total measurements are 11.3 by 4.8 by 2.1 inches for the XTX and 10.9 by 4.4 by 2.1 inches for the XT. That sub-12-inch length is the key, though, as it will allow them to fit in pretty much any case on the market. Some cases, such as your humble author’s Fractal Define R6, don’t allow GPUs longer than 12 inches as it interferes with the HDD cage. Upgrading from almost any current GPU to these new Radeons will be literally plug-and-play. Most high-end cards these days use two eight-pin connectors, so it’ll be a five-minute upgrade. That won’t be the case with the partner boards, though. As you can see above, the Asus TUF was the first out of the gate and it’s a three-slot behemoth with triple eight-pin connectors. Gigabyte’s flagship GPU, the Aorus Elite, is a 3.5-slot GPU as well. We expect the rest of AMD’s partners to show off gigantic versions of the Radeon 7900 series next week.

The new Radeons are expected to give the RTX 4080 a run for its money. AMD has stated it’s not targeting the RTX 4090, but the second-tier GPU instead. That’s part of the reason why it priced its GPUs below Nvidia’s GPU, which costs $1,199. The XTX is $199 less expensive, and the XT is $299 less expensive. If they’re within striking distance of Nvidia’s card, that could lead many gamers into AMD’s arms. However, Nvidia is also rumored to be announcing a price cut to the RTX 4080 to ward off AMD’s advances. We expect an announcement on that the same day AMD’s cards go on sale. Nvidia loves to rain on AMD’s parade and vice versa, so it’ll be interesting to see how it all unfolds on the 13th.

Thanks to AI, it’s probably time to take your photos off the Internet

Spyware Hunters Are Expanding Their Toolset

Who are the new Fox Weather anchors?