Not all of us are looking for an augmented or virtual reality setup that costs hundreds, has to be tethered or charged in advance, or comes with a steep learning curve. There’s no shortage of these types of products on the market; meanwhile, some of us want to dabble in AR and VR without breaking the bank or rearranging our living rooms. It’s a relief, then, that we’re starting to see products like the HoloKit X: a headset said to employ existing Apple technology to provide an easy yet impressive AR experience.

Developed by a startup called Holo Interactive in New York City, the HoloKit X leverages the user’s iPhone (and, if they have one, their Apple Watch) to insert virtual elements into the real world. The user slides their phone into the 215-gram headset and straps the device onto their head. After that, the HoloKit X’s stereoscopic lenses do all the work, placing the visuals from the iPhone’s screen into 60 degrees of real-life view.

This means unlike smartphone-dependent VR headsets like Google’s Cardboard, the user is never looking directly at the phone screen itself. Instead, mirrors and windows inside the HoloKit X translate iPhone visuals onto a transparent viewfinder, helping to reduce eye strain. 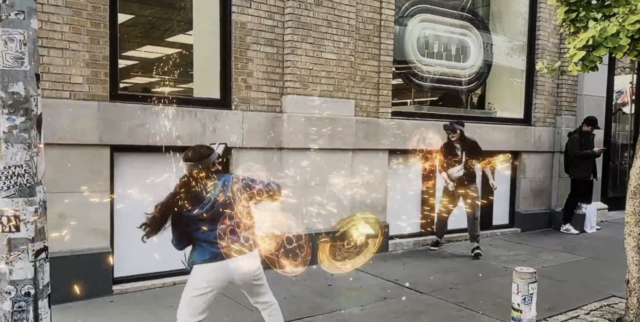 A duel captured via spectator view in the HoloKit app. (Image: Holo Interactive)

The visuals themselves come from “Realities,” Holo Interactive’s name for its AR experiences. The company’s website currently lists eight Realities, the first of which (like many AR/VR systems) is meant to teach the user how to use the device in the first place. Its other Realities appear to be mild yet magical supplements to the ordinary world: In one, electric tendrils stream from the user’s hair, while another allows the user to “sculpt” the 3D images of their dreams with virtual sparkles. Users can also download the beta version of the HoloKit app to try out new Realities before they’re released, including one that allows for some Harry Potter-style duels.

So where does the Apple ecosystem come in? The iPhone uses low-energy Bluetooth to host local channels so other HoloKit X users can scan a QR code and join in. (Friends and family members can also spectate via the same channel.) Some Realities use the iPhone’s Taptic Engine to provide oddly-placed haptic feedback on the user’s forehead. The device can work with the user’s Apple Watch to enable spatial and motion control tracking, allowing the user to interact with their virtual environment. If the user has AirPods, they can use those to enjoy spatial audio.

Because it doesn’t contain any actual tech, the HoloKit X is far cheaper than other AR/VR devices at just $129 and is available via the company website. Although Holo Interactive says the headset is best used alongside iPhones with LIDAR support (i.e. the iPhone 12 and later), it works with those as far back as the iPhone XS, making it a relatively accessible device for dabblers.

Microsoft links Russia’s military to cyberattacks in Poland and Ukraine

What's standing in the way of AI for life sciences – GeekWire

This Chatbot Aims to Steer People Away From Child Abuse Material

Where does Fox 2 Detroit broadcast from?