This Week in Space: A Quasar That’s Redder Than Red


Welcome back to This Week in Space. Today, we’ll pour one out for the Geotail satellite, which has probably taken its last readings. Also, Japan’s Epsilon-6 rocket exploded shortly after launch last week, and now we know why. But there’s abundant good news, too. The James Webb Space Telescope captured some truly astonishing images of the Pillars of Creation. It also got three galaxies for the price of one, and a quasar that’s redder than red in the bargain. We’ve also got an update from OSIRIS-REx. Plus, Dimorphos (the DART asteroid) sprouted a surprise second tail!

The Geotail satellite is a joint project of NASA, Japan’s aeronautics and space agency (JAXA), and the Japanese Institute of Space and Astronautical Science (ISAS). Its thirty-year mission lifetime has taught us much about the Earth’s magnetosphere. But Geotail has gone above and beyond the scope of its mission, discovering oxygen, silicon, sodium, and aluminum in the atmosphere of the moon. It has even taught us much about what causes material from the Sun to pass into the magnetosphere. Alas, all good things must come to an end, and Geotail is no exception. It had to happen sometime: The satellite’s last operational data recorder failed. 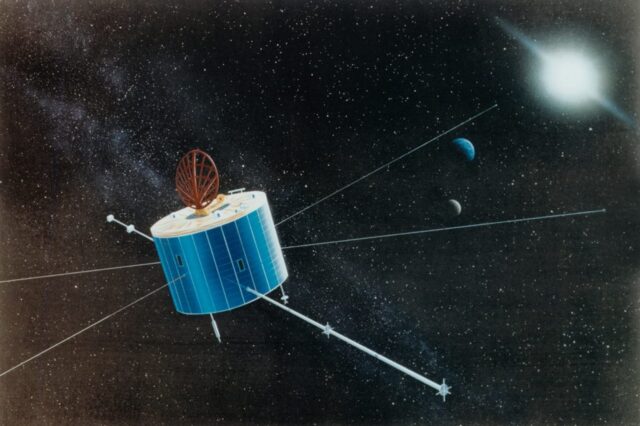 An artist’s concept of the Geotail spacecraft. Credit: NASA

In a statement, NASA said, “The team at JAXA discovered the error with the recorder and have been performing tests to investigate the cause and extent of the damage. Ongoing attempts to recover the recorder have been unsuccessful. Without a functioning recorder, the science data from the U.S. instruments can no longer be collected or downlinked. NASA, ISAS, and JAXA are deciding the best path forward for the mission given the failure.”

This week, NASA and the European Space Agency (ESA) released a jaw-dropping portrait of the iconic Pillars of Creation. Without further ado:

The image is astonishing in its own right. But it also shows yet another example of the differences between the JWST and Hubble. Check out this comparison of what the two telescopes see when they look at the same part of the sky. At left, the view from Hubble; at right, the new image from Webb.

It might be the same sky, but there are a lot more stars in the right-hand panel. How can Webb peer through the clouds? My colleague Ryan Whitwam explains: “The structures are composed of cool interstellar gas, which looked mostly opaque to Hubble. However, the JWST’s infrared NIRCam makes the clouds semi-transparent. Thus, the new image multiplies the number of visible stars.”

In a statement, NASA said, “Along the edges of the pillars are wavy lines that look like lava. These are ejections from stars that are still forming. Young stars periodically shoot out supersonic jets that can interact within clouds of material, like these thick pillars of gas and dust. This sometimes also results in bow shocks, which can form wavy patterns like a boat does as it moves through water. These young stars are estimated to be only a few hundred thousand years old, and will continue to form for millions of years.”

For more on the images, check out Ryan’s article: Webb Telescope Captures Breathtaking Image of the Pillars of Creation.

OSIRIS-REx Back On Track to Return Sample From Asteroid Bennu

One satellite has died, but there’s good news about another. NASA reports that after a course correction, its asteroid sample return spacecraft, OSIRIS-REx, is on track to return next year.

OSIRIS-REx stands for the Origins Spectral Interpretation Resource Identification Security – Regolith Explorer. It surveyed asteroid Bennu and successfully collected a sample, and headed for home in 2021. It’s been on its way for a year now, but this is the first course correction NASA has had to make.

The spacecraft has to hit a precise orbital “keyhole” in order to drop off its sample without the capsule burning up in our atmosphere. Once it does, it will continue on to another asteroid, Apophis, under the name OSIRIS-APEx.

Apophis caused some concern in the early 2000s because its orbit suggested that it could pose a real threat to Earth in 2029 if it passed through the OG gravitational “keyhole.” Thankfully, it missed. Instead, its threat may turn out to be a blessing. That 2029 pass will put the asteroid in the right place at the right time for OSIRIS to rendezvous with Apophis after its extended study of Bennu.

A team of astronomers looking into the early universe with the James Webb Space Telescope got more than they bargained for. It turns out that what we thought was one massive, ancient galaxy is actually an entire cluster of galaxies, forming around an “extremely red” quasar.

The quasar in question, SDSS J165202.64+172852.3, is a deeply redshifted active galactic nucleus (AGN) from the very early Universe, some 11.5 billion years ago. The quasar shines red, to begin with. However, its redshift pushes it even further into the infrared, which makes Webb just perfect for studying the thing. Astronomers had speculated that its host galaxy could be merging with some unseen partner. But the team was not expecting Webb’s NIRSpec instrument to clearly indicate that they were looking at not just one galaxy, but at least three others “swirling” around it. 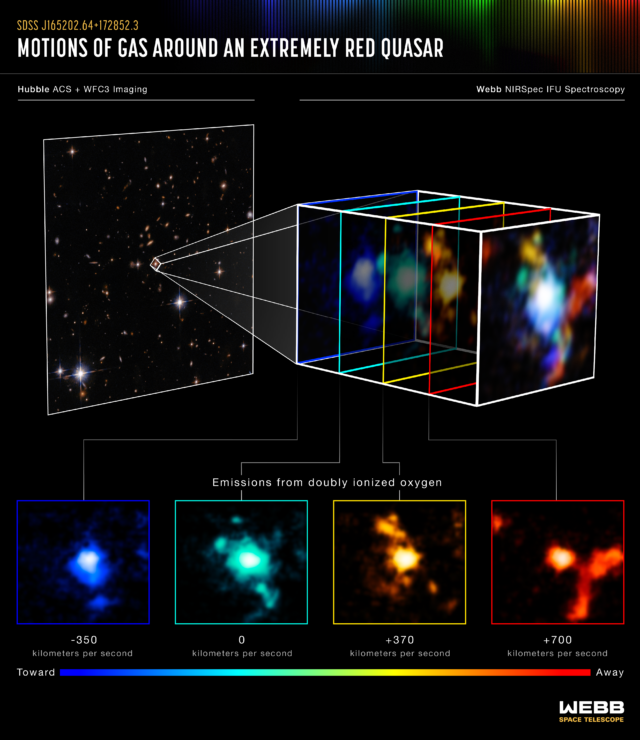 The Doppler effect is responsible for red- and blue-shifting, which astronomers use here to determine how celestial objects like galaxies are spinning. Credits: NASA, ESA, CSA, STScI, D. Wylezalek (Heidelberg Univ.), A. Vayner and N. Zakamska (Johns Hopkins Univ.) and the Q-3D Team

Key to these observations is a technique called integral field unit (IFU) spectroscopy. Using IFU, the team mapped out the motions of the whole region. That’s when they realized these galaxies were whipping around one another at “incredibly high speeds.”

“Even a dense knot of dark matter isn’t sufficient to explain it,” said team lead Dominika Wylezalek. “We think we could be seeing a region where two massive halos of dark matter are merging together.”

“Our first look at the data quickly revealed clear signs of major interactions between the neighboring galaxies,” added team member Andrey Vayner. “The sensitivity of the NIRSpec instrument was immediately apparent, and it was clear to me that we are in a new era of infrared spectroscopy.”

JAXA launched its Epsilon-6 rocket on October 12, carrying more than a dozen different satellites. Unfortunately, the rocket self-destructed just seven minutes after launch. After some root cause analysis, JAXA identified the rocket’s reaction control system as the point of failure. The first and second stages fired normally. However, telemetry shows that the rocket was in the wrong alignment for the separation and ignition of its third stage. Half of the eight motors that were supposed to fire up and spin-stabilize the rocket’s third stage never did. Consequently, it veered off course.

JAXA flight control said in a statement, “At the time of deciding on separation of the second and third stages, we observed that the vehicle’s flight attitude was deviating from the target.” So, they sent a “command destruct signal,” terminating the flight. Sadly, all of the satellites aboard were destroyed in the blast.

It’s hard to overstate the importance of that little spacecraft NASA smashed into an asteroid. The agency’s Double Asteroid Redirection Test (DART) represents a giant leap for humanity’s ability to reorganize our solar system as we see fit. Naturally, a lot of telescopes are spending a lot of time watching the asteroid to see what happens next. The most recent surprise: Observations from Hubble reveal that Dimorphos has grown another tail. 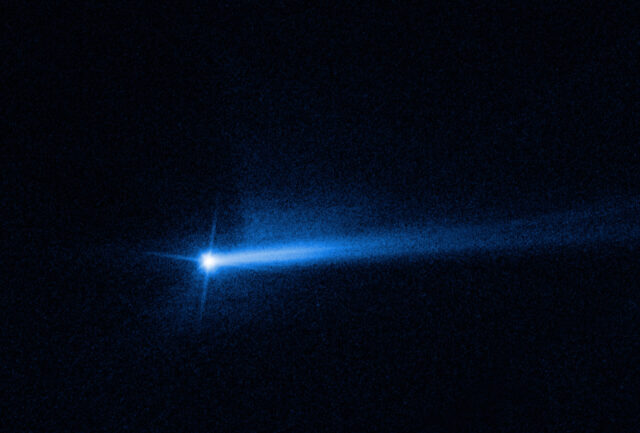 It’s an unexpected development, although the ESA notes that astronomers often see similar behavior in comets and asteroids. While the twin tails stretch far away from Dimorphos, they’re not exactly behind it. Instead, the asteroid’s new tails are probably made of particles streaming away in the solar wind, just like a comet’s ion tail.

ESA writes, “The relationship between the comet-like tail and other ejecta features seen at various times in images from Hubble and other telescopes is still unclear, and is something the Investigation Team is currently working to understand. … In the coming months, scientists will be taking a closer look at the data from Hubble to determine how the second tail developed.”

When it comes to celestial bodies with multiple tails, Dimorphos is in good company. Many great comets have two or more tails. Halley’s Comet, for example, showed up in 1986. Despite its “worst-case” viewing circumstances, with the comet far on the opposite side of the Sun from Earth, the great comet appeared with no fewer than seven tails. The ESO caught a nine-minute exposure showing the tails fanning out behind the comet.

Halley’s Comet orbits once every 76 years. It’s the most active of the short-period comets, by far. And when it shows up, it always gets human attention. Since ancient times, people have seen comets as portents or omens; indeed, this is where we get the word “ominous.” Halley’s Comet heralded the Battle of Hastings in 1066, and its 1222 apparition may even have inspired Gengis Khan to turn his armies toward Europe.

Astronomers as far back as China’s Han Dynasty left reliable records of this remarkable comet. But earlier Chinese records also concur with records from elsewhere in classical antiquity. Pliny and Aristotle write of a comet that appeared in 467 BCE.  Its timing, duration, location, and associated meteor shower all strongly suggest that it was Halley’s Comet. That same year, a suspiciously-timed meteor the size of “a wagon load” fell upon an unsuspecting town in Thrace. It left a crater that made the town a tourist attraction for centuries.

Every year the Earth passes through the debris trail of Halley’s Comet, and it creates a spectacular, long-lasting meteor shower called the Orionids. So, if the skies are clear where you are, you might wander outside to see if you can catch a shooting star. These meteors appear to radiate from a point near the constellation Orion, hence the name. Technically the Orionids peaked last night (October 20), but don’t worry: they’re active all through October and November.

This whole month is also great for planet-watching, especially in the evening. Saturn and Jupiter remain brightly illuminated. Even under bright skies, you can catch these gas giants if you look to the southeast, shortly after dark. And this month, Mars begins its retrograde motion. 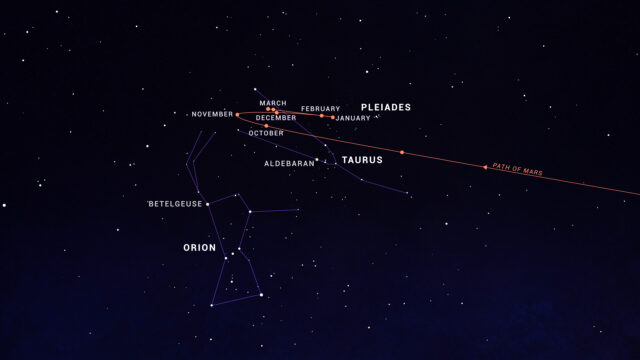 Every two years or so, Mars appears to double back on itself, reversing its motion in the sky. While you’re looking toward Orion this October and November, take note of where Mars appears in the sky on different nights. This happens because we orbit faster than Mars. Every 26 months, we overtake the planet as we orbit the sun.