US Expected to Announce Major Achievement in Nuclear Fusion


This site may earn affiliate commissions from the links on this page. Terms of use.
(Credit: bluebay2014/iStock/Getty Images)
The US Department of Energy is expected to announce a major scientific breakthrough on Tuesday amid rumors of groundbreaking nuclear fusion research. A lab in Livermore, California has reportedly produced a nuclear fusion reaction that could bring the world closer to zero-carbon energy.

An anonymous source familiar with the National Ignition Facility at the Lawrence Livermore National Laboratory (LLNL) recently told CNN that the lab had pulled off a nuclear fusion reaction that resulted in net energy gain. CNN’s story broke just hours after three sources shared similar news with the Financial Times, saying the results were only preliminary but were game-changing nonetheless. Now the US Department of Energy is saying energy secretary Jennifer Granholm and under-secretary for nuclear security Jill Hruby will unveil a “a major scientific breakthrough” at LLNL this week.

Nuclear fusion has historically produced less energy than it has consumed, resulting in a net loss. It’s the opposite of nuclear fission, which is what occurs in today’s nuclear power plants: While fission splits an atomic nucleus into two smaller particles, fusion combines two nuclei into one heavier nucleus, releasing vast amounts of energy in the process. Though scientists have successfully achieved nuclear fusion in the lab before, the process—which must be highly controlled—has always “cost” more energy than was produced, rendering it useless in a practical setting. 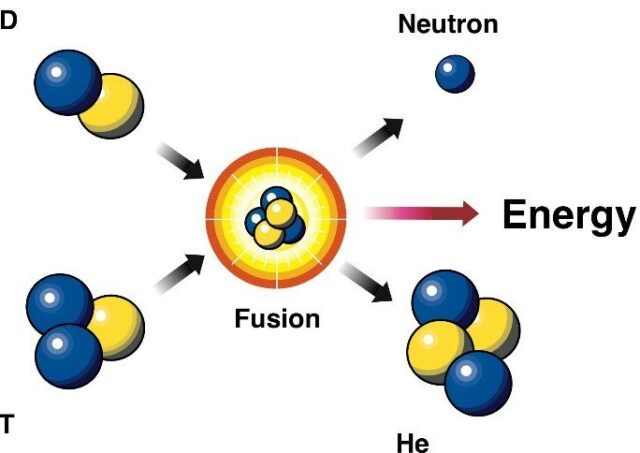 Illustrative depiction of the fusion reaction, which produces an alpha particle and a high-energy neutron. (Credit: DOE)

If LLNL really has achieved net energy gains via nuclear fusion, the milestone will constitute a massive triumph in the international journey toward virtually boundless zero-carbon energy. Thirty-five countries have been working together via ITER, a multi-billion dollar nuclear fusion collaboration, since 1985 in an effort to create a demonstration fusion reactor. Their mission has only grown more urgent since: Global reliance on carbon-emitting fossil fuels has produced and exacerbated a virulent climate crisis, while Russia’s recent invasion of Ukraine has emphasized the need to move away from natural gas.

As it turns out, LLNL (a federal lab focused on energy, biosecurity, and other sciences) might have beaten ITER to this particular milestone’s finish line. A Department of Energy committee recommended early last year that LLNL more aggressively pursue the deployment of fusion energy, resulting in the revival of a fusion program and annual budget. LLNL’s renewed dedication to fusion appears to have paid off—but it’ll take official word from the Department of Energy on Tuesday to confirm.

How Localization Automation Can Help Businesses