The James Webb Space Telescope is wasting no time exploring the universe, and it’s not just looking at galaxies and stars — exoplanets are also on the menu. The European Space Agency (ESA) has announced the first-ever confirmed detection of carbon dioxide in the atmosphere of an exoplanet. The planet, known as WASP-39 b, is nothing like Earth, but this is still a major step forward in the study of alien worlds.

WASP-39 b is situated about 700 light years away from Earth, and it orbits very close to its host star. It’s one of a class of exoplanets called “hot Jupiters.” This one is even larger than Jupiter, though, and it reaches temperatures of 1,650 degrees Fahrenheit (900 degrees Celsius). It was discovered using the transit method, which requires a planet to pass in front of its host star from our perspective on Earth. This is the most common way of spotting exoplanets, and it also offers the tantalizing opportunity to probe their atmospheres.

When light from the star WASP-39 (also known as Malmok) passes through the exoplanet’s expansive atmosphere, some wavelengths of light are filtered out. By analyzing that light, we can identify some of the atmospheric components. However, you need a highly sensitive telescope to do that — something like the Webb Telescope and its Near-Infrared Spectrograph (NIRSpec) instrument.

The NIRSpec absorbance spectrum of WASP-39 b shows a small “hit” between 4.1 and 4.6 microns, a telltale sign of carbon dioxide. The ESA calls this “the first clear, detailed, indisputable evidence for carbon dioxide ever detected in a planet outside the Solar System.” No other astronomical instrument is capable of differentiating so many colors of light between 3 and 5.5 microns, which is considered essential for identifying water, methane, and carbon dioxide. The presence and ratio of these molecules are crucial to understanding the processes — biological or chemical — on exoplanets. 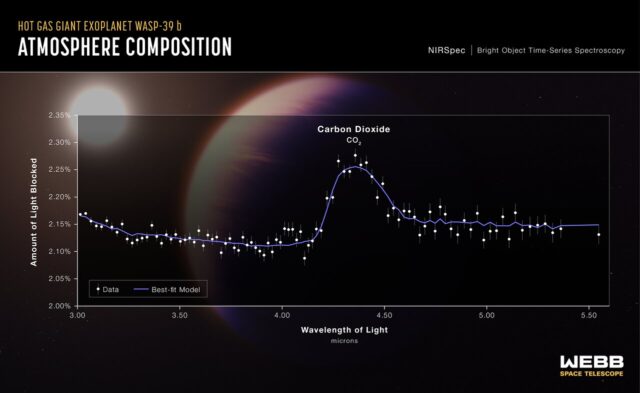 A transmission spectrum of the hot gas giant exoplanet WASP-39 b, captured by Webb’s Near-Infrared Spectrograph (NIRSpec) on July 10, 2022, reveals the first definitive evidence of carbon dioxide in the atmosphere of a planet outside the Solar System.

Carbon dioxide can be an important signal that expands our understanding of a planet’s origins. Measurements of carbon dioxide can also help determine how much of a planet is solid versus gas. That could tell astronomers which super-Earths are rocky like our own planet, and which are small gas giants like Neptune.

The James Webb Space Telescope launched in late 2021 after more than a decade of development hell. It’s all paying off, though. The spacecraft has performed perfectly since launch, and it is already making major discoveries. NASA believes Webb could continue operating for up to 20 years, so there’s a lot of time to take a peek at other exoplanets like TOI-1452 b.

The Advantages of a Foot Pump for Car Tires > 9ja Tide