Which Nerd Bible Would You Be Sworn in On?

Here’s his tweet, confirming he’s indeed the member of Congress whose choice went immediately viral when it surfaced in a tweet documenting the (mostly religious) tomes that other new members had selected to accompany their own swearing-in ceremonies.

This is a sweet follow-up to his tweets soon after the election in November, in which he very excitedly confirmed he was “freaking out” about one perk of his new job…

G/O Media may get a commission 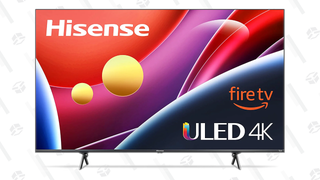 TV time
This 58-inch smart TV has 4K visuals on a stunning ULED screen that boosts color, contrast, and brightness, has Fire TV built-in for convenience, and even includes Alexa.

Read the whole thread to see him teasing the very Superman issue that surfaced in Congress today, as well as his very astute reply to any haters lurking in his feed: “For all of you upset that I still read comics and suggesting that I need to do more serious reading…..um…….anyone who understands comics knows that comics are an essential part of American fiction. And the lessons learned are invaluable. It’s serious shit.”

So now, io9 readers, it’s your turn. If you were elected to Congress, or some other high office that involved taking a solemn oath—what nerdy text would you pick as part of the ceremony? Lord of the Rings? The Colour of Magic? The Psychotronic Encyclopedia of Film? Or maybe something fictional, like Evil Dead’s Necronomicon? (Examples may or may not be from actual io9 staffers.) We want to know!

Want more io9 news? Check out when to expect the latest Marvel, Star Wars, and Star Trek releases, what’s next for the DC Universe on film and TV, and everything you need to know about the future of Doctor Who.

How AI and IoT Work for the Humans

How AI and IoT Work for the Humans

Did Kim DeGiulio get married?