This site may earn affiliate commissions from the links on this page. Terms of use.
(Photo: Caviar)
When you picture the word “luxury,” what do you see? What about “obscene luxury?” For some, the resulting image is of a brand-new iPhone with a Rolex embedded in the back, thanks to a bespoke smartphone customization company that has begun offering that very thing.

Caviar, a Russian design atelier known for its over-the-top smartphone modifications, has officially put its latest release up for sale: an iPhone 14 Pro with a Rolex Cosmograph Daytona face on the back. Referred to as Daytona for short, the phone’s body has been completely reworked to include eight diamonds, 18-karat gold, and a number of other extravagant touches.

The inspiration for the composition is the Rolex centerpiece itself. Normally $41,000 on its own, the Cosmograph Daytona was originally designed to be “the ultimate timing tool for endurance racing drivers,” and this shows in Caviar’s design. Above the watch face sit three decorative dials representing a speedometer, fuel gauge, and oil indicator. Decorative dashboard switches stud the bottom back of the case right above Caviar’s logo, which is embossed in double-plated gold. Beneath the Daytona’s shining metal accents is a titanium body with black physical vapor deposition (PVD) coating, the latter of which is a mainstay of many of Rolex’s pieces. 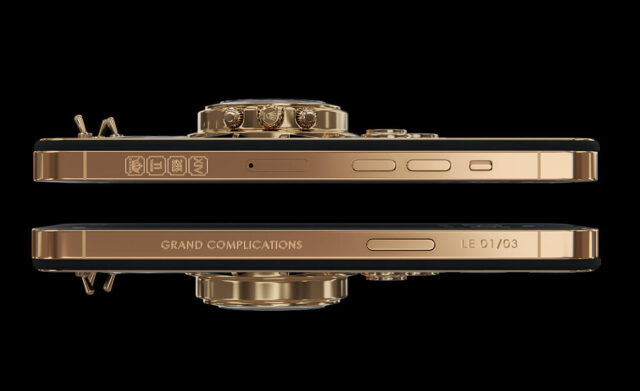 Though gratuitous, the Daytona is in line with what Caviar customers (or more likely, confused observers) have come to expect from the brand. Caviar’s previous releases have incorporated bits of meteorite, pieces of Tesla vehicles, and elements from the original iPhone. Many of its more “affordable” (i.e. $7,000) phones and cases use real gold. Caviar has even ventured into the pseudoscience category by offering a unit that claims to protect the user from smartphone radiation.

There are probably about three people on the planet who both find the Daytona appealing and have the $133,670 in disposable funds to purchase it. Lucky for them, Caviar has made exactly three units available. As with the rest of the company’s products, each order is handled by a personal consultant who sees the transaction through from payment to package delivery—so don’t worry, this precious cargo won’t get lost in the mail.

One of 5G’s biggest features is a security minefield